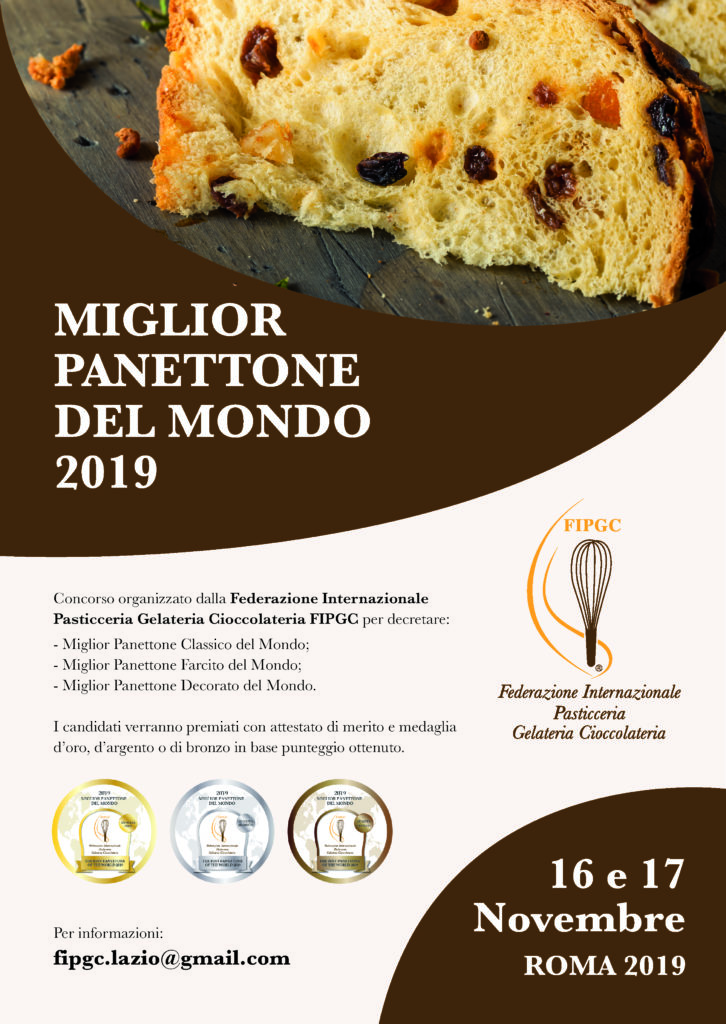 The era of the global-panettone arrives. In Rome the show for the Best Panettone of the World.

8 November 2019pasticcereNewsNo Comments
The International Federation of Pastry calls for the best international pastry chefs for an unprecedented challange: create the the best panettone of the world.
Milan November 2019. The era of the global-panettone arrives. Who said that the best panettone should be only from Milan? From years pastry chefs from all over Italy assert themselves with panettone that are recognized and appreciated from the best gourmet. But now the challange is becoming global. So why China, United Arab Emirates or Australia can’t make good panettone like the ones made in Milan?
The International Federation of Pastry Ice Cream and Chocolate had the idea to make the first edition of “The Best Panettone of the World” that is going to take place in Rome at Palazzo Falletti on 16th and 17th November 2019.
“The choice of Rome means that the panettone i now a cake that belongs to Italy and not only to Milan – says the FIPGC President Roberto Lestani- and I want to tell you more. From years now the panettone is known and aknowledged as globaly recognized pastry masterpiece, so much that it is protected by some specific product rules that impose quantities, products and proceedings so that it could be called such a product. For this reason we thought of this challange to allow some of the best Pastry chefs in the world to test themselves and to find the best recepie, without geographical and cultural limits”.
There would be 165 partecipants:  among them some coming from China, Japan, Saudi Arabia but also from the nearby France and Spain. The first commandment? Find the right compromise between all the ingredients. The pastry chefs will have to knead, weight, let rise and give shape to the italian cake who is the symbol of Christmas with the aim to get the scores of the jury and win the coveted award.
During the two days show there would space for three different categories. We will start with the tradition, proclaiming which will be the “Best Classic Panettone”, risen for many hours with all the steps and the needed ingredients: flour, butter, raisin, orange peel, vanilla and the unmissable mother yeast.
The challange goes on with the second cathegory, the “Best Stuffed Panettone” where the challange would all be on the filling creativity instead of the candied fruits. Pistachio or chocolate? Peppers or some exotic passion fruit or mango cream? Also in this case the jury will choose the most original and creative creation.
At the end, the award for the most beautiful panettone the “Best Decorated Panettone”, because we know a great Pastry chef is also always a great artist. Here there would be no limits to fantasy, the decorations could be the most varied and fanciful, the important thing is that they are not going to compromise the natural shape and the wonderful essence of the panettone.
The jury will be made up of Roberto Lestani, Matteo Cutolo and Enrico Casarano Pastry, Ice Cream and Chocolate World Champions and Mario Morri and Gianni Pina international award-winning pastry chefs. Furthermore for the award of the “Best Decorated Panettone” the jury is enriched with judgment of pastry decoration experts Cinzia Iotti, Claudia Mosca and Gennaro Filippelli.
To them the onerous task to judge the scent, the backing, the taste, the softness and the proofing, but also the most original, the presentation, the cleaning of the work station and the quality in the raw materials chosen, nothing is going to be left to chance. All that remains is to wait for the final verdict.
November 16/17 – Palazzo Falletti, Via Panisperna, 207 Rome
For further information: www.federazionepasticceri.it
It would be possible to follow the Championship of the Best Panettone of the World live on the International Federation of Pastry Ice Cream and Chocolate Facebook page: www.facebook.com/fipfederazionepasticceria/
The International Federation of Pastry Ice Cream and Chocolate (FIPGC) is the institution that promotes the Italian pastry around the world. The FIPGC organizes all over Italy events, exhibitions, high level master classes, individual or team training to compete in national and international challanges. Since 2015 it organizes the Italian and the World Pastry and Cake Design championships. In 2017 entered the Italian Hotel Management Schools National Pastry Championship: sponsored together with MIUR Ministry of Education, Universities and Research, it is the first junior pastry championship of the hotel management schools, it gives students who want to become pastry chefs to compare with great pastry masters of Italy.
Tags: best panettone, panettone, Pastry

The best Panettone of the World

“The Best Panettone of the World FIPGC”